These are the padding & style categories on FursuitReview and what each contains:

Padding is extra material put inside a costume to make it look a certain way.


Digitigrade
Digitigrade padding, often shortened to "digi," refers to costumes with legs and/or feet that have been padded to give the appearance that the wearer is walking on their toes, similar to how many animals' legs are formed.

Plantigrade
Plantigrade, or "planti" is a lack of padding in the legs/feet of a costume. Since humans are plantigrade (walk on the flats of our feet), there is usually no need to add anything to create the illusion of plantigrade locomotion.

Muscle
Muscle padding is a specific stylistic choice made in order to bulk out a costume, giving the wearer the appearance of large muscles. FursuitReview uses this category for the more common "muscle suit" type of costumes as well as padding that obfuscates the human form to give the illusion that a wearer is not inside.

Plush
Plush padding is done with the intent to create the illusion that the costume is a large stuffed toy. These costumes are generally rotund with shotened limbs and large hands and/or feet. Often, a costume with this padding also contains visible stitching, seams, and/or zippers as stylistic choices to complete the "toy" illusion.

The style of a costume is a distinctive look that results from how the costume is made.


Realistic
Realistic costumes are meant to look like real-life living and breathing animals. They usually have resin eyes with vision through the tear ducts and natural fur colors.

Toony
Toony costumes are meant to look like walking cartoon characters. They usually have large eyes and bright fur colors.

Real/Toony Hybrid
Commonly referred to as "Semi realistic," this style combines features of realistic and toony costumes to give its own unique look.

Kemono
A very distinct toony style modeled after the anime and manga of Japan. Costumes in this style usually have large dome eyes, tiny mouths, and small bodies with large paws.

N/A
This category is for items in which a style does not apply. This is especially applicable for reviews of single items, such as paws, which can usually go with any type of costume.
You may use the checkboxes below to help sort reviews.
Please note that the checkboxes utilize the "AND" operator, which only shows reviews that match ALL of your selections.
There is also a search function to further filter your results.

(Note that your results are automatically filtered to show Padding when no checkboxes are selected at first, since this is the page you are currently on. However, you can force it to show all options by hitting the reset link.)

All reviews posted in this category are listed below.
Do you have one to add? Submit a review!

[NO] Blu the Dog Plantigrade Fullsuit by Butter Cup Creations

[NO] Cygote the Fullsuit by Hidden Treasury Fursuits 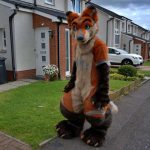