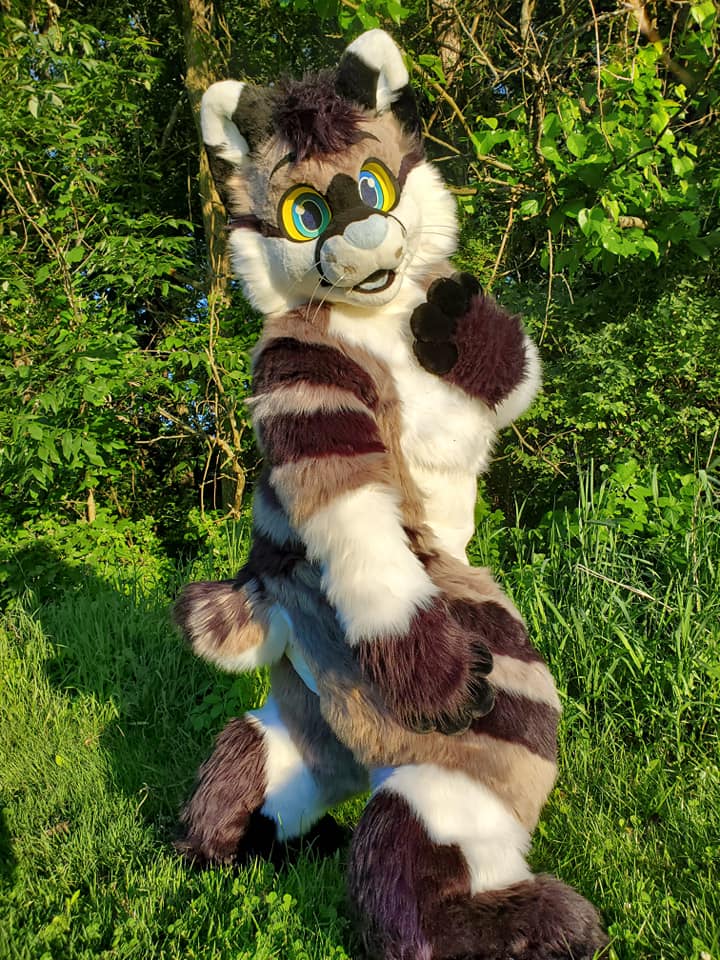 The head is overall the best part of this suit. It is comfortable, extremely light-weight, has good breath-ability, and has decent vision. There are blind-spots from the nose bridge and muzzle which is to be expected. The inside is lined nicely, with no foam exposed.

The entrance hole to put on the head is much too small.To put the head on, I have to physically squeeze my head through the suit slowly. The pressure from the squeeze often gives me headaches. Once on, the fit is a little tight for my taste but comfortable.

Visually, I’m very satisfied. The expression is just what I wanted and the head is very symmetrical both in the sculpt and the face markings. The whiskers, unlike my previously owned Aheunfursuit head, haven’t fallen out and seem sturdy. The follow me eyes work perfectly.

Holes- Unfortunately, this suit had a lot of holes upon unboxing. There was one small hole in the muzzle marking and one very large hole that is exposing foam that runs along the entire back of an ear.

Fur- The hair and eye-cheek facial stripes are not the same fur as the rest of the black markings. About half the black markings were replaced on the suit during the commission process with a different black fur, without my knowledge or opinion. These blacks are different colors, textures, and qualities. Aheun stated they replaced black markings due to discoloration, this discoloration is very visible in well-light spaces. The discolored fur is purple-ish. There are glue marks around the eyes.

Neck- The neck markings line up poorly to the bodysuit and the neck is shaped oddly. When worn with the bodysuit, the back of the neck folds upwards a lot exposing the backing of the fur to view and my own human neck. It will not lay flat while suiting no matter what I do to it.

Shave- The white and grey fur didn’t shave as nicely. They are choppier and coarse compared to the blacks. There are many spots, especially around the eyes, where the backing of the fur is showing. The shaving on the ear-tips is choppier than the rest of the suit. There is one noticeable seam on the eyebrow.

Eyelids- The best part of this suit, the eyelids are issue free. They are perfect and change the expression tons.

The arms-sleeves do not fit past my elbows. They are much to skinny for my arms while the arms on the bodysuit are big on me.

Fit- The bodysuit ended up being way too tall. Aheun was provided a DTD. This suit isn’t dropped-crouch yet when I wear it, the suits crouch sits at my knees. My crouch sits above the red line (in the photo provided) while wearing the bodysuit and the bottom of my rear sits an inch above the tail.There is about 5-6 inches of extra height on the bodysuit.

Other fullsuit customers of Aheunfursuits I reached out to expressed fit issues as well.

Quality- Before wearing the bodysuit, it was already littered with holes. There were 5 large holes (mainly in the markings) and many small holes. There is also a lot of messy stitching in the bodysuit that either will quickly become a hole or is off the seam and pulling the fabric in weird ways. After suiting, a lot of these seams did pop.

Pros The armsleeves are visually appealing

Pros The bodysuit is visually appealing and the digigrade is shaped how I wanted. The shorter white fur was a great surprise, it gives a lot of dimension and is super soft.

Design- The bodysuit also has extremely wide fur skirts that flair out the leg holes, so large the feet-paws can be completely be hidden under it. The back stripe doesn’t line up with the continuation of the stripe on the tail.

Fur- Like the head, Aheun replaced some of the black fur on the bodysuit with a different furs without me knowing. Some markings are purple-ish due to this. Half of the furs are not as high-quality and feel course.

Pros They are lined and cuffed.

Cons They are tight on my hands and I have smaller hands. It is difficult to put them on.

Pros Built on shoes and are correctly sized when on. They are also lined asides from the shoe portion.

Cons Very hard to get my feet physically into the outdoor feet for some reason. While wearing the feetpaws, the backs of my feet blistered horribly and bleed. The “handle” part of the croc-like shoe base seems to slightly be pushed inward by the foam of the paws causing it to rub against my heel. The outdoor feet didn’t survive 30 minutes of light-use, the material just didn’t work in action. My previous feetpaws from a Aheunfursuits 2017, owned previously by the maker and was worn once, had a similar issue with the bottoms falling apart.

Pros They are cute and have well done pawpads. The handpaws have very smooth shaving.

Cons I dislike that the cuffing on the handpaws doesn’t match any of the other linings/cuffs but that is a nit-pick!

Absolutely adorable! Aheunfursuits did a wonderful job making both the indoor and outdoor feetpaws have nice minky paw pads. The paw pads poking out of the outdoor feetpaws is one of my favorite features.

Special Attachments and Features
It is important to note I purchased both indoor and outdoor feet. My outdoor feetpaws do not function outdoors.

Pros Nice thick elastic! Can barley feel it there and is very easy to put on. Cons The circle base with the elastic straps wasn’t sewn straight.

Pros Sewn into the bodysuit! No holes on the tail.

Cons It doesn’t sit at my rear so it is very sad and droopy instead of a perky nub tail.

Pros The tail has a little bounce to it and a nice shape. They matched my character design perfectly.

Pros Sewn into the bodysuit!

Cons Not as visually appealing as the partial tail. For some reason the bodysuit tail is smaller and less rounded, the shape makes the fur flow oddly at the end. It isn’t a huge issue but worth noting since the partial tail is better in my opinion.

Special Attachments and Features
I purchased two tails from AheunFursuits, one attached to my bodysuit and one for a belt.

The colors of the fur not being consistent is my biggest let downs with this suit. The black fur was already a color compromise from dark grey so to have two different colored blacks is disappointing.