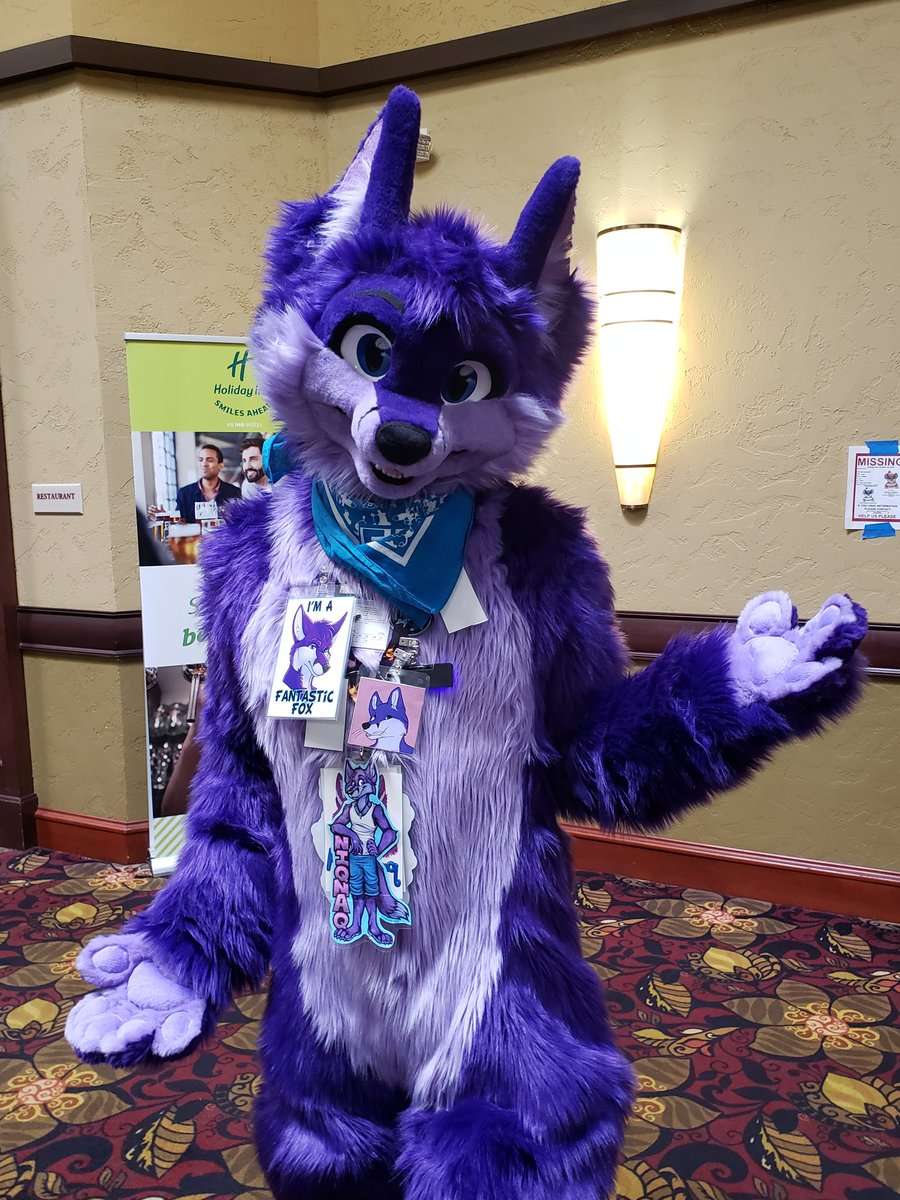 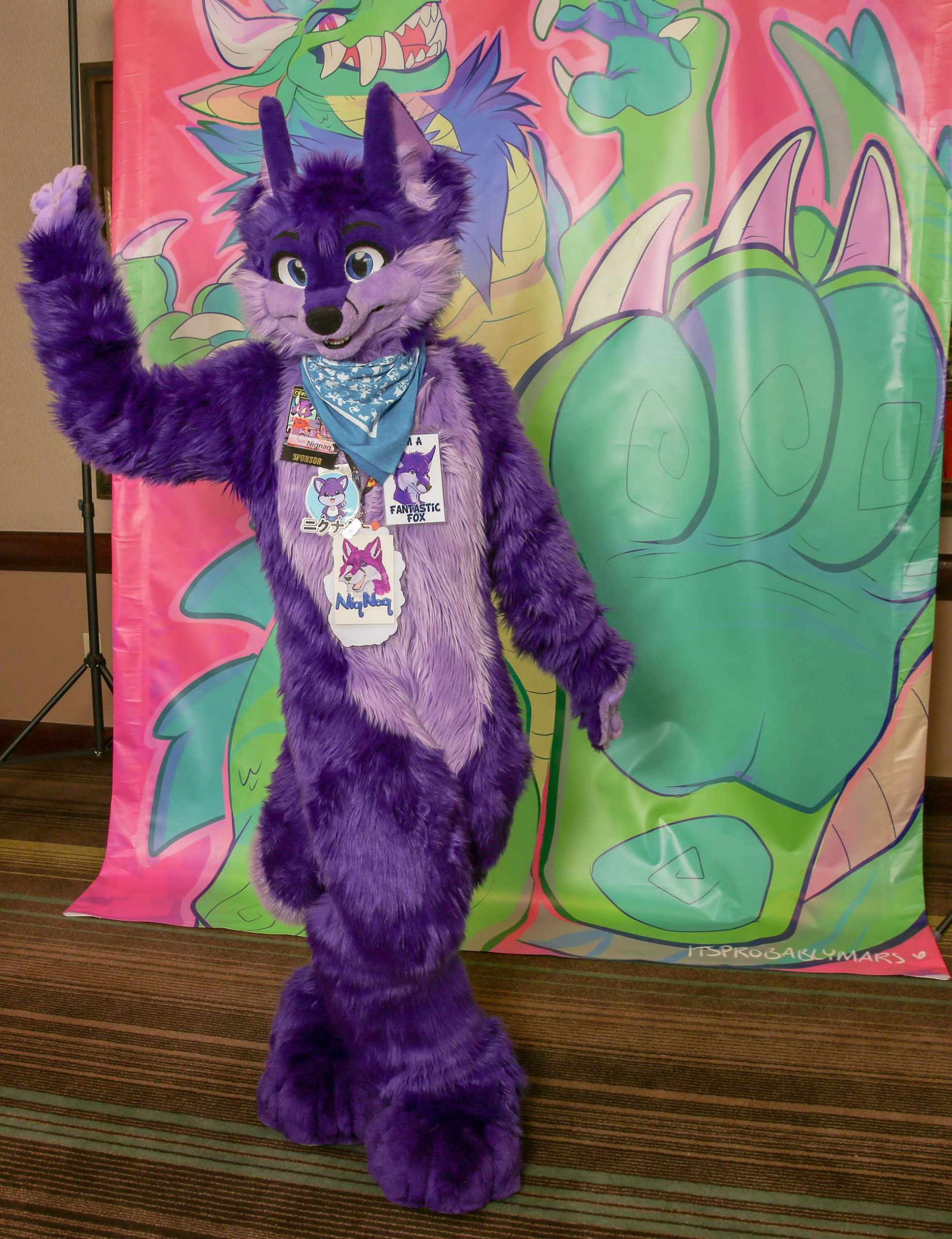 I also had an issue getting the movable jaw to work well. The maker explained that they were still figuring out the best way to get the jaw to work for people and wanted to avoid a situation where people have to keep their jaw open slightly just to breathe.

Prior to receiving the suit, I reached out to the maker to inquire about the completion date and expressed my disappointment it was taking so long.

The overall quality of the suit is very good. Now that I have it I’m happy with it. But it was a very long and frustrating wait to actually get the suit.

The maker let me know upfront that they would need a duct tape dummy, so that allowed me to be ready when it was time to make it and send it in.

After this deadline passed, I reached out in Feb 2018. They responded that they were working on April’s commissions and that I was with the August commissions.

I reached out again in August 2018. The response was that the team was working on the June commissions, and that I was with the August ones. At the point they asked me to make and send in the duct tape dummy. At the time I thought this was a sign that they were about ready to get started with my suit. Looking back I think that this was more of a delaying tactic to make it seem like they were about ready when it would be a while still.

I sent the duct tape dummy within a couple weeks. I didn’t hear back, so reached out in September to see if it had been received. They said it had, and that they were working on June and July commissions and that I was with the August group. I asked what the completion date would be for the August suits. The person said “let me ask” and never gave me an answer.

I reached out again in December 2018. I got a response of “You are in the next batch. So still few months”. I asked if there were any events that caused additional delays. The response was “No we have a lot of commissions before you and in the time you order we didn’t know how to evaluate the time frame to make them”. When I asked them how long it takes to make a suit they said “2-3 weeks” so that doesn’t make sense that they cannot evaluate how long it takes to make a suit. I mentioned that I had a convention in July 2019 that I wanted the suit for, and they said “We will make it for that time!” 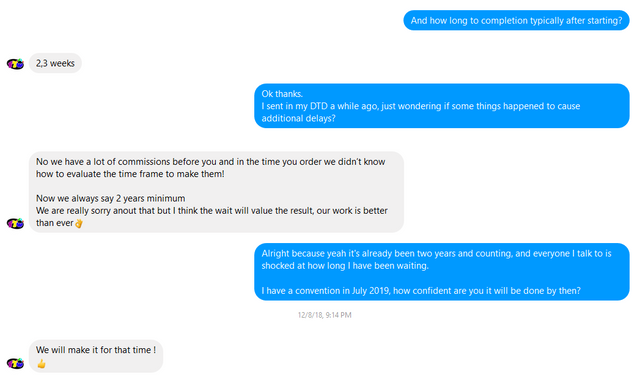 I reached out a few days later asking if it would be done in time for a May convention, and they said it would be done by March. I was told I’m “on the board”, which I never got a clear explanation of what that even means. They said one reason for delays is a customer that changes their mind about a color and they have to order different stuff and wait for it to arrive.

However, they sent me samples of the colors they would use for my suit well before they actually started working on my suit. If someone had an issue with one of the colors, it could be addressed at this stage, not after a lot of work had been done on the suit. On top of that, they work on multiple suits at once. If they were truly waiting on material to work on one suit, they can work on another suit while they’re waiting. So this feels like another excuse. We messaged a bit more, and I was again told I was “on the board” and would be sent pics soon. This was in Dec 2018.

At this point I was pretty frustrated, so I pressed for more details about why things were taking so long. I was given various reasons for why exact dates could not be given, until eventually they asked me not to reach out again until March.

I waited until the end of March 2019 to reach out again. I asked about the completion time, and they said it is impossible to give more precision. Recall they had already committed to finishing in time for the convention in July 2019. They said the head would be sculpted in April. I still had not been sent one picture with any sort of progress on the suit, so At this point I was so tired of waiting I was planning to just cut my losses and move on. Finally, on April 1st, I was sent a picture of one of the eyes and part of the head. This was the first sign that any work had been done on the suit. It was enough to settle me down.

In May 2019 I asked for an update. They said that more progress had been made on the head but didn’t want to send pictures.

At the start of June 2019 they sent updated pictures of the head which had more progress. Didn’t hear anything rest of the month.

I reached out for an update in July 2019, during the convention that they assured me the suit would have been ready for. They said the head fur was sown together and about to add it to the head. I asked if the suit would be ready in time for a convention in late August. They said “we can try”. They sent new pics on July 20th with the head nearly complete. They sent pics of the tail and body suit a few days later. It was at this time I realized they didn’t have the most recent ref sheet. I had forgotten to send it because the process had taken so long. They agreed to make the changes to the suit. They said normally they would charge for this but because I had been patient and kind throughout the process they would not charge me. So this is the one step where I contributed to the timeline by not providing the updated ref sheet sooner.

In August 2019 they asked about tongue color.

In late September 2019 they sent updated body and tail pics that had the changes. They sent pics of the feet a few days later.

At this point they asked for payment. However, they didn’t give me instructions on how to pay. I thought that I would be given instructions, so I waited.

In mid October 2019 I asked for an update on the shipment date. They responded “As soon as we get the final payment”. Apparently they expected me to send a message along the lines of “I’m ready to make the payment” while I thought they were going to send me payment info. They said they didn’t want to “rush me into making the payment”. I don’t see why they can’t just send the info so the person can pay when they’re ready. Either way, they sent me an invoice, and I paid it immediately.

The suit was shipped on Oct 21st 2019, my birthday. It arrived on Oct 25th. This was enough time for me to try the suit on and have it ready for a convention at the end of October.

So that was my experience. If they had just been upfront with me from the beginning about how long it would take instead of giving me a bunch of excuses, I wouldn’t have been so frustrated by the end.

If you’re looking for a good quality suit at a reasonable price and don’t want it for a long time, then you could use this maker. Otherwise, I would look elsewhere.