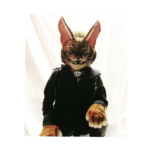 [NO] Cygote the Fullsuit by Hidden Treasury Fursuits